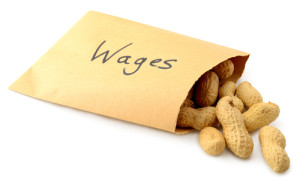 The main purpose of the creation of the federal minimum wage was to keep the American workers out of poverty level and increase the consumer purchasing power that will in turn stimulate the economy of the country. The current federal minimum wage is $7.25 an hour.Several cities of US approved the gradual raise of the minimum wages to $15 an hour in 2014.

The pros and cons of raising the federal minimum wage

There are people who believe the federal minimum wage should be raised, while others think it is a bad idea.  The federal minimum wage became a hot topic when the city of Seattle voted to enact a $15 per hour minimum wage.  The topic has now taken center stage at the United States Presidential debate. Former United States Secretary of State Hillary Clinton, one of the candidates running for President, has proposed raising it to $12 an hour, while Senator Bernie Sanders, another candidate, wants it to be $15 an hour.

Some arguments for raising the minimum wage are:

Citizens will experience a pay raise that could meet their basic needs and also their living standards. A report from the (CBO) that is the Congressional Budget Office in 2013 estimated that 900,000 workers will move above the poverty level. Workers will rely less on the government and also on the state-sponsored financial aid programs.

Workers will be motivated to work since their wages will increase. Workers will also be retained over a long haul. A cohesive team of employees will be maintained easily since the pay encourages talented individuals to stick around. All this could in turn improve productivity and help keep turnover rates down.

Extra pay for workers will trickle down the retailers, and this will boost the economy. The increased wages will make consumers save a lot.

Arguments for not raising the minimum wage are:

Business will raise their prices

Business owners will increase the price of their commodities to shoulder the costs. They will do so to make the money up and gather for the increased wages. Charging more will only be there option to meet their expenses of paying workers.

A pay raise will boost workers’ morale, and this will impair their drive for self-betterment. Workers receiving $15 per hour might be less likely to go colleges and improve their socioeconomic status. The workers will not seek out a specialized job when they see a pay rise of their current salary.

Less jobs will be available for lower earners

Some people argue higher wages will stunt job growth. The more an employer pays for a single employee’s labor, the less they will have to hire more people. Therefore over time less people will be employed.

Let us know in the comments how you feel about the federal minimum wage. Should it be increased or left alone?

What to know about government classification of secrets

The US government has a formal system of protecting information that, if disclosed, could hurt national security. [...]

Analysis: Responding to FBI search, Trump and allies return to his familiar strategy: flood the zone with nonsense

In response to the FBI search of former President Donald Trump's home in Florida on Monday, Trump and his allies in Congress and right-wing media have returned to his preferred strategy for communicating in a crisis: say a whole bunch of nonsense in rapid succession. [...]

Opinion: Why Trump thinks FBI search could be a winner for him

Experts: Megaflood is coming to California, and it could be the most expensive natural disaster ever

• What the just passed $750 billion health care, energy and climate bill means for you • Opinion: The Inflation Reduction Act is a huge victory in this existential fight [...]

• The Rhine river is drying up, making it hard for cargo ships to travel [...]

Wildfire burns more than 12K football fields in one night

Europe is in its fourth heatwave of the summer sparking extreme heat and drought conditions. Wildfires are burning across southern France as historic rivers in the UK and Germany are running uncommonly low. [...]

Anne Heche's son mourns mother: 'I am left with a deep, wordless sadness'

Anne Heche's career has spanned over 30 years with roles in films like "Six Days, Seven Nights" and "Donnie Brasco." [...]

W. Kamau Bell: The fundamental promise the US has broken more than 300 times

The United States of America is a particularly weird name for a country. Most countries have one-word names, made up of only a few syllables. And those names often have thousands of years of history behind them. They come from the language of the people who come from those lands. [...]

The Department of Justice has launched an investigation into the Southern Baptist Convention and its entities on the heels of an explosive report that detailed the mishandling of allegations of sexual abuse by church leaders, the SBC said in a statement Friday. [...]

A Ukrainian power plant is facing increased shelling. The idea of a nuclear disaster is a daily reality

Every day Olga is bused from her home in the Russian-occupied town of Enerhodar, on the banks of the Dnipro River in southeastern Ukraine, to the nearby Zaporizhzhia nuclear power plant where she works. [...]

As Puerto Rico hurtles toward another crisis, a generation isn't sure it has 'a future on the island'

A week before former governor of Puerto Rico Wanda Vázquez was arrested by the FBI on bribery charges, pop superstar Bad Bunny riled up a throng of concertgoers in San Juan, calling out the current governor and the island's private electric company in an expletive-filled rant. [...]

The captain of a San Diego vessel that sank in 2021 killing three of 32 smuggled migrants on board was sentenced to 18 years in prison Friday, the US Attorney's Office said in a release. [...]

Stolen skulls of Black Philadelphians were displayed in an Ivy League classroom for years. They may soon receive a proper burial

Behind glass-fronted cabinets in a University of Pennsylvania classroom, the skulls of Black Philadelphians whose remains were either graverobbed or unethically obtained were on display until 2020. [...]

'I will either save us ... or we'll be found together': Mom ties herself to her kids during flood

Photos taken at the scene of the fatal helicopter crash that killed NBA legend Kobe Bryant, his daughter and seven others were shared by a Los Angeles County firefighter during the cocktail hour at an awards ceremony a month after the crash, according to witness testimony. [...]

Cleveland Browns quarterback Deshaun Watson, who started Friday's preseason game in Florida against the Jacksonville Jaguars, said in a pregame interview that he is "truly sorry to all of the women that I have impacted." [...]

Confessions of an auto mechanic: What to know when taking your car in for maintenance

Whether you are afraid of being ripped off or just feel out of your depth in conversations with auto mechanics, taking your car in for maintenance can be stressful. [...]

Workplace 'energy vampires' can drain your life force. Stop them with these tips

You sit down at your desk and are about to start your workday when a coworker saunters up to you. After 20 minutes of chatting, your colleague finally leaves you alone, but you find you are too drained to complete any tasks efficiently. [...]