UPDATE: Congress has negotiated a spending bill, but will miss the December 16th deadline. Another stop-gap bill will be needed to extend the deadline. The new deadline will be December 22, 2015.

Today, Paul Ryan announced the House of Representatives will vote on the spending bill on Friday, while the Senate will vote shortly thereafter.

We will start a new countdown once the stop-gap has been approved by the President.

UPDATE: The House passed the stop-gap and the President has signed it.

A new countdown has been started.

UPDATE: We decided to start a federal government countdown clock for December 11, 2015.

A budget deal has been approved and the debt ceiling has been raised, but will a shutdown happen on December 11, 2015? It could. Congress has a few weeks to appropriate money for the federal government through September 2016.

With a new Speaker of the House of Representatives (Republican, Paul Ryan of Wisconsin) and opposition to hotly-debatted policy riders in the spending bills, anything can happen. Stay tuned.

With hours to go, a budget deal has been approved by Congress. A federal government shutdown has been avoided.

Will the United States federal government shutdown at midnight on September 30, 2015? 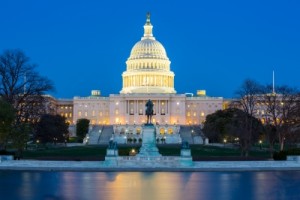 We don’t know yet, but the countdown has started. Many have said the shutdown will not happen including House Speaker John Boehner. However, nothing is set in stone. Anything can happen.

Congress must pass a spending bill before October 1st, the start of the new fiscal year, to prevent a government shutdown. Due to partisan disagreements (e.g., funding Planned Parenthood, Iran deal, etc.) a spending bill has been delayed down to the wire. There has been finger pointing from both parties on who is responsible for the delays. So far, the Senate and the House of Represenatives need to vote on the spending bill (also know as  a Continuing Resolution or “CR”) to fund the federal government until December 11, 2015. The votes from Congress will take place on September 30, 2015, and if approved, the President will need to sign.

Federal agencies have been preparing. They are currently notifying stakeholders (federal employees, federal contractors, customer, etc.) to brace for a furlough if the federal government shutdowns.

We will post updates to the federal government shutdown as time get closer to the deadline.  Stay tuned.