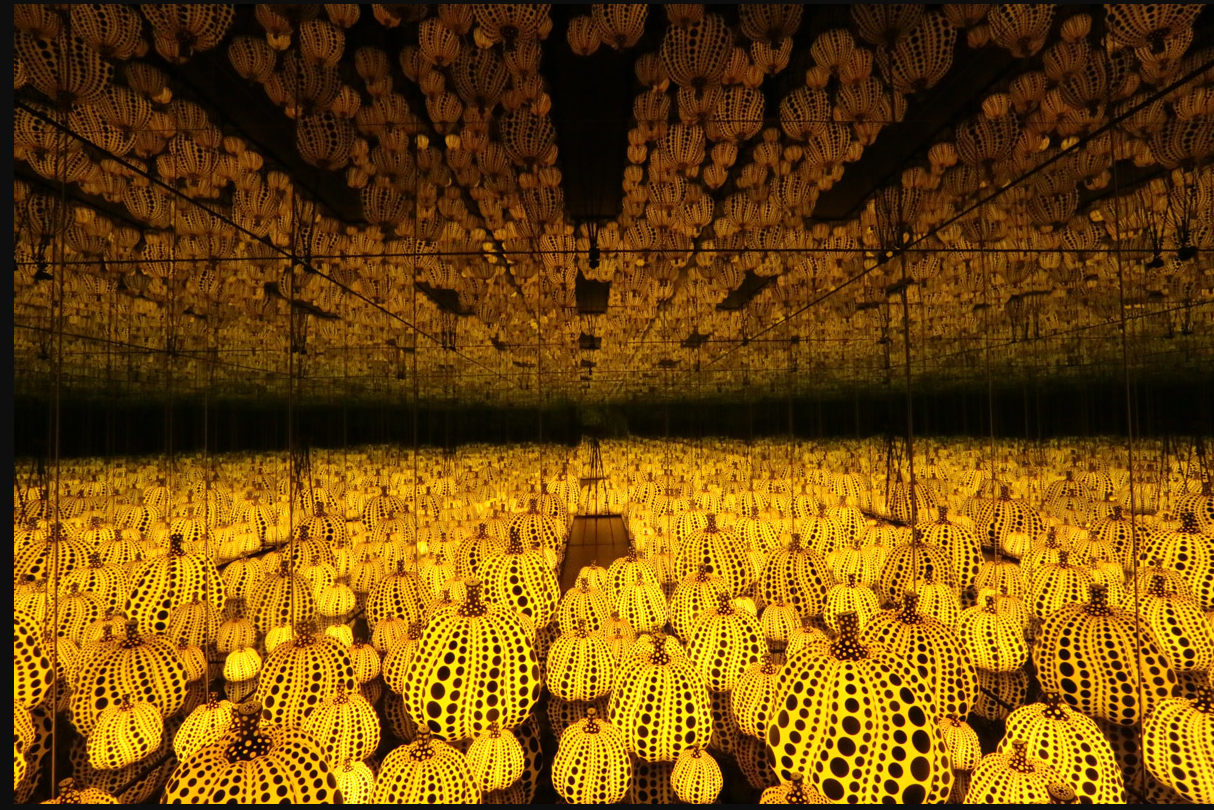 Embracing the arts is what makes life pleasurable and introspective.  The concept of employing art to delve deep into the human mind and question the state of life itself is a treat.

When the local news outlets announced the Yayoi Kusuma: Infinity Mirrors exhibition was coming to the Hirshorn in Washington DC, it was exciting. It was a great way to support art and enjoy this artist’s iconic installations.

Like many, my hunt for passes began and came to a screeching halt. The insane demand for the Yayoi Kusama: Infinity Mirrors exhibit became apparent. The website the Hirshorn provided for free advanced timed passes was not adequate. The passes would “go on sale” at noon and were gone within the first few minutes.  Hard to believe thousands of tickets disappeared in a matter of a few minutes, but that is what happened. That has to be a world record! A part of me wonders if bots were grabbing up passes.

Three weeks in a row the dreaded “sold out” words taunted art lovers like myself. The museum mentioned they give walk-up passes, but landing a ticket is not guaranteed. Standing outside for hours for a chance to get a ticket also isn’t very appealing.

To be fair, the Hirshorn have made attempts to aid the demand. They’ve added staff, extended hours, set up free timed passes, and shortened wait-times, but it hasn’t helped much. The ground-breaking demand is too high. At this point, you probably have better odds at winning the lottery than acquiring tickets for the Infinity Mirrors.

If you did get a chance to catch the exhibition, let us know if it was worth it. It looks very interesting and fantastical. Like stepping into a new, strange world. A one-of-a-kind experience for certain.

*This article was written by a Virgo Philosophy staff member

It was November 1997 and Dina Honour was hosting Thanksgiving dinner for the first time. The then 27-year-old invited a group of New York City friends who, like her, had decided to stay in the city over the holidays. [...]

Don't blame the turkey. Here's why you really feel sleepy after indulging in a holiday meal

More than four million Americans are set to take to the skies for US Thanksgiving, kicking off one of the busiest stretches of the year for travel. [...]

Famed "Today" meteorologist Al Roker was recently hospitalized and had to miss this year's Macy's Thanksgiving Day Parade. His co-hosts Savannah Guthrie and Hoda Kotb wished him a speedy recovery. [...]

Don't ruin your slumber during the holidays. Try these sleep expert tips

Holidays and stress seem to go hand in hand. To cope, many people often steal hours from their sleep to pack in all the cooking, shopping, gift wrapping, parties and family time. [...]

This year's Thanksgiving travel season will be the biggest since the start of the pandemic and the third largest for travel in the last 20 years. CNN's Pete Muntean reports on the viral tips and hacks to beat the holiday rush. [...]

What to say when someone lobs a horrible remark your way

The table is set, friends and family draw near, and you already know what comments or questions are going to come your way. [...]

Opinion: Before you slice your holiday pie, read this

Perhaps the most memorable recipe in "The Suffrage Cook Book," published in 1915 by the Equal Franchise Federation of Western Pennsylvania is "Pie for a Suffragist's Doubting Husband," which instructs: "Mix the crust with tact and velvet gloves, using no sarcasm, especially with the upper crust." The introduction to the volume, whose message was votes for American women, asserts that "the dining room is a… [...]

Things have been relatively quiet on the Covid front. That may come to an end soon

• Cristiano Ronaldo refuses to let light dim on his career as he makes history at Qatar 2022 • Why some Arabs are furious about Western coverage of the Qatar World Cup [...]

World's skinniest skyscraper is complete — and its interiors are remarkable

The designers behind the world's skinniest skyscraper have just given fans of ultra-luxury living an early Christmas gift. [...]

Hear how parents were united with their infants from Russian orphanage

Project Dynamo founder Bryan Stern explains how the organization united parents with their infant children who were in a Russian orphanage during the war in Ukraine. [...]

Stone Age cooks were surprisingly sophisticated, combining an array of ingredients and using different techniques to prepare and flavor their meals, analysis of some the earliest charred food remains has suggested. [...]

Elon Musk tweeted a video mocking a Twitter closet full of "#StayWoke" apparel. In a since deleted tweet, Musk called the "hands up, don't shoot" movement "fiction." CNN's Don Lemon lays out the facts behind the social justice movement. [...]

Flossie, at the age of almost 27 -- which is the feline equivalent of being 120 human years old, according to Guinness World Records -- has been crowned the world's oldest living cat. [...]

In a CNN exclusive, Sam Kiley speaks to Kherson resistance fighters that helped liberate the Ukrainian city from Russia. [...]

A hoard of ancient coins has been stolen from a museum in southern Germany, according to the Bavarian State Police. [...]

A 25-year-old woman died while vacationing in Mexico. Prosecutors obtain arrest warrant for her friend

• No tip is too small, police say as they investigate Idaho student killings and vow to increase presence after holiday break [...]

Will Pence testify against Trump? Hear what Haberman thinks

CNN political analyst Maggie Haberman explains why former Vice President Mike Pence is now considering speaking to the Department of Justice after they made a request for an interview in its investigation into the January 6th insurrection. [...]

The Food and Drug Administration is advising people in 13 states not to eat certain raw oysters from South Korea after at least one person in Las Vegas got sick with a virus that can cause diarrhea and vomiting. [...]

Adidas to investigate claims of inappropriate behavior made against Kanye West

Adidas will begin an investigation into allegations of misconduct against Kanye West, with whom the company had a partnership that it ended in October. [...]

Ukraine raced to restore power across the country on Thursday, a day after Russia sent a new barrage of missiles to target critical infrastructure, resulting in the temporary shutdown of most of its power plants and leaving the "vast majority" of people without electricity. [...]

A paramedic who responded to a horrific crash and attempted to rescue two teenage girls was unknowingly treating her own daughter. CNN affiliate CTV reports. [...]

After an ordinary workday turned deadly at a Walmart in Chesapeake, Virginia, survivors and investigators are spending the Thanksgiving holiday questioning the motive of an employee who opened fire on coworkers, killing six before fatally turning the gun on himself. [...]

An employee had a gun to her forehead; others ran for their lives: Witnesses describe the Virginia Walmart shooting

Though Jessie Wilczewski had been working at the Chesapeake, Virginia, Walmart for only a few days, her Tuesday night shift started like all the rest, with a routine team meeting in the break room. [...]

President Joe Biden said Thursday that he would work with Congress to "try to get rid of assault weapons" after a recent spate of shootings in the US. [...]