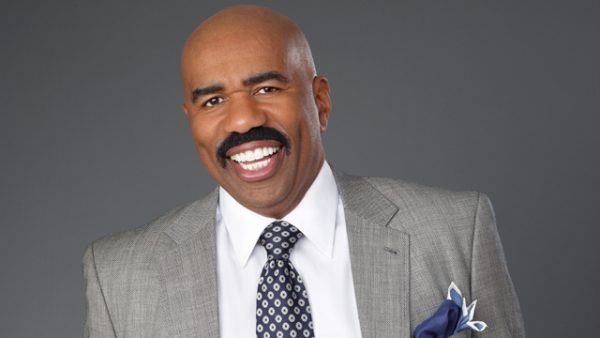 Comedian Steve Harvey has done it again! He has ended up in the media’s spotlight due to controversy. This time it is over a leaked email he reportedly sent out to his staff at the “Steve Harvey” show in Chicago.

Steve makes it crystal clear for his staff not to speak him unless an appointment has been made. He states his previous policy was too lenient and people abused it. Now he wants space.

The leaked email was first published last Wednesday by a Chicago blogger named Robert Feder. And since then it has gone viral.

Good morning, everyone. Welcome back.

I’d like you all to review and adhere to the following notes and rules for Season 5 of my talk show.

There will be no meetings in my dressing room. No stopping by or popping in. NO ONE.

Do not come to my dressing room unless invited.

Do not open my dressing room door. IF YOU OPEN MY DOOR, EXPECT TO BE REMOVED.

My security team will stop everyone from standing at my door who have the intent to see or speak to me.

I want all the ambushing to stop now. That includes TV staff.

You must schedule an appointment.

I have been taken advantage of by my lenient policy in the past. This ends now. NO MORE.

Do not approach me while I’m in the makeup chair unless I ask to speak with you directly. Either knock or use the doorbell.

I am seeking more free time for me throughout the day.

Do not wait in any hallway to speak to me. I hate being ambushed. Please make an appointment.

I promise you I will not entertain you in the hallway, and do not attempt to walk with me.

If you’re reading this, yes, I mean you.

Everyone, do not take offense to the new way of doing business. It is for the good of my personal life and enjoyment.

The Fallout of the Leaked Email

Now we can all agree this email is coarse. Steve makes no bones about needing privacy.  Soon after the email went viral, countless memes were created on social media to make jest of the incident. And while some have dubbed him as “entitled” and “rude”, others were understanding. A few people have questioned whether Steve Harvey has become too pompous due to Hollywood. It also doesn’t help that his show is moving to Los Angeles in the Fall and his staff in Chicago are scrambling for new jobs.

Despite the criticism, Steve remains unapologetic. In his ET interview, he states he could have handled things differently, but likened his experience to being in prison.

But instead of jumping on the bandwagon and bashing Steve. We should consider what he is saying. If you ever experienced your lunch interrupted, a meeting added to your schedule abruptly, or were ambushed on your way in or out of the office, then you can sympathize with Mr. Harvey. To be honest, he did what most of us daydream of doing.  Declaring your need for work-life balance is not wrong.  Nevertheless the method of expressing such need should be professional and sensitive to others.

Citing the harsh impacts of climate change, the governor introduced an $8 billion plan to preserve the state's diminishing water supply

Report on possible cuts for Southwest to be released at 1 p.m. ET [...]

Steep water cuts are coming for the Southwest

An extraordinary drought in the West is drying up the Colorado River and draining the nation's largest reservoirs -- Lake Mead and Lake Powell. And amid the overuse of the river and the aridification of the region, the federal government is preparing to make mandatory water cuts and asking states to devise a plan to save the river basin. [...]

Unlike the lost city of Atlantis, when this 19th century Welsh village was submerged underwater, it only took a dry spell for it to resurface and reveal its ruins. [...]

Standing atop the Hoover Dam today, the millions of tourists who visit each year can get a real sense of the climate crisis in the West: In addition to extreme heat, the sight of so-called "bathtub rings" that envelop Lake Mead has become an unsettling reminder of where the water level once was before the region's historic drought began. [...]

Think it's hot now? Report shows it's only going to get hotter

CNN meteorologist Chad Myers breaks down a new study warning of an 'extreme heat belt' that will impact over 100 million Americans by 2053. [...]

An 'extreme heat belt' will impact over 100 million Americans in the next 30 years, study finds

Worsening heat and humidity as a result of climate change will bring extremely dangerous heat indices to much of the United States in the next 30 years, increasing both the intensity and frequency of the hottest days of the year, according to a new study published Monday. [...]

Coastal erosion is the latest battle for this US island

Puerto Rico, which is battered by hurricanes and threatened by sea level rise, is experiencing coastal erosion at an alarming rate, scientists warn. [...]

Explosions at Russian ammunition depot were due to 'sabotage,' Moscow says

Video: Two doctors struggled to diagnose him. He had an early case of monkeypox

Alessandro Rugge, 51, says he had one of the earliest confirmed cases of monkeypox in Arizona, and that getting a diagnosis was challenging. [...]

The Republican nominee for secretary of state in Arizona is a self-proclaimed member of the far-right extremist group the Oath Keepers who repeatedly shared anti-government conspiracies and posts about stockpiling ammunition on social media. [...]

A former Los Angeles County fire captain walked off the witness stand three times during testimony Monday while being questioned about whether he took photos of Kobe Bryant's remains at the 2020 helicopter crash that killed Bryant, his 13-year-old daughter, Gianna, and 7 others. [...]

Work-from-home benefits and cheap rent. This city is turning into a magnet

A growing number of Americans are crossing the southern border and making Mexico their new home. CNN's David Culver takes a look at the cause and effect of Americans settling in Mexico City. [...]

The Department of Education said Tuesday that it will cancel $3.9 billion in student loan debt for 208,000 students who attended the now-defunct for-profit ITT Technical Institute -- bringing the total amount of loan discharges approved under President Joe Biden to nearly $32 billion. [...]

Nuclear-capable missile traveled 4,200 miles in a routine test, the US military says

The US Air Force on Tuesday tested an unarmed nuclear-capable long-range missile, according to the Air Force Global Strike Command. [...]

A coalition of Amazon employees walked off the job on Monday at an air freight facility in San Bernardino, California, demanding better pay and working conditions, in the latest sign that worker organizing efforts continue to spread across the tech giant's vast retail and logistics network. [...]

Ezra Miller, who stars in the upcoming DC film "The Flash," is seeking treatment for matters related to mental health, according to a statement Miller provided to CNN through a representative. [...]

A toddler was playing in the backyard. Then he spotted something unusual

A Georgia woman, who had been missing for four days, was reunited with her family after a toddler spotted her feet past his family's fence line. CNN affiliate WGCL's Zac Summers reports. [...]

Kristin Chenoweth managed to leave host Steve Harvey speechless after she got "Wicked" on a recent episode of "Celebrity Family Feud." [...]

A 10-year-old boy had part of his leg amputated after a shark bit him while he was snorkeling off the Florida Keys over the weekend, his family says. [...]

Woman killed by alligator after she slips into pond

An 88-year-old woman was killed by an alligator after she slipped into a pond while gardening at an adult living community, authorities in South Carolina told CNN and its affiliate WTOC. [...]

A painting believed to be by Pablo Picasso and estimated to be worth millions of dollars has been found during a drugs raid in Iraq, according to authorities. [...]

Gina Lollobrigida, 95, to run for Senate in Italy

Italian cinema icon Gina Lollobrigida will run for the Senate in her country's elections next month, weeks after celebrating her 95th birthday. [...]

He guarded LeBron James in a pro-am game. This is how it turned out.

Standing room only, fans lined around the block and social media coverage like never before, all there to see one man: a four-time NBA champion and four-time NBA Most Valuable Player. [...]

YouTuber and engineer Allen Pan built four robotic legs for a snake so it can walk. His video shows how he set about undoing millions of years of evolution to give snakes their legs back. [...]

Will Sarah Palin win a seat in Congress?