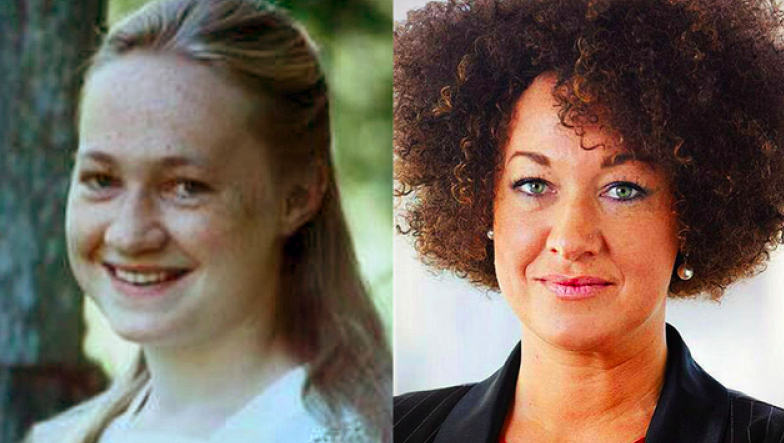 Over the weekend, I had a chance to watch The Rachel Divide on Netflix. Days prior, I had scrolled passed the documentary. I failed to click on it because I felt like I knew Rachel Dolezal’s story already. Now that I have watched it, I am thankful because I truly did not know her story. By watching the documentary, not only did I learn more about her, but it conjured emotions within me. It made me ponder existential questions like, What is race?, What is blackness?, and Who am I?

Who is Rachel Dolezal?

I heard of Rachel Dolezal prior to watching the documentary. I can vividly recall her childhood picture juxtaposed to her adult image. On one hand you had a smiling little girl with long blonde hair, green eyes, and fair skin, while on the other hand, a woman with a kinky curly afro or long blonde braided hair, and tanned skin.

I remember the media depicting her as a confused white woman pretending to be black. Some networks even had her parents verify her heritage on national television. I kept feeling like white folks were confused by Dolezal. To them, it seemed, like the idea of a white woman desiring to be anything but white was ludicrous. And they wanted to quickly denounce her actions to protect their “whiteness”.

Rachel Dolezal (now called Nkechi Amare Diallo) was born November 12, 1977, in Montana to a deeply religious family. She shared her childhood with one biological brother and four adoptive siblings who were of color.

Dolezal and her siblings have stated in multiple interviews how their childhood was strict and included corporal punishment. Allegedly, Rachel and her adopted sister were also sexually abused. According to Rachel, she felt responsible to educate her adopted siblings of color about their heritage.

In part of the film, a man can be said saying,

Ultimate white privilege to be genetically white, but then say, ‘No. I am black,’ cause  you don’t have to take any negative.

The man makes a valid point. His comment is akin to a notion I heard growing up as an African American. Growing up people of various ethnicities enjoyed “black culture”. People used to say, ‘Everyone wanted “to be black” until the police show up then they weren’t black anymore’.

For some, Rachel dressed the part of a black woman, as black woman come in all shades, but she has never faced the ill effects of being black – let alone a black woman.

I accept how people close to Rachel Dolezal feel betrayed. To them, she is a liar. To her, she felt like she was being her “true” self for once. I understand how their pain has turned to contempt for her. She will never truly know how it feels to be a “black” woman. However, is it fair for her to be a pariah in her own community? Did she not create any positive change?

Despite me understanding both sides, I must admit, I feel  sympathetic to Dolezal. As an African American, I find her to be incredibly brave. The idea of a “white” woman saying no thank you to white privilege and challenging the status quo is intriguing. I know most won’t agree with me, but it is refreshing when a person forges their own path in life; beat to their own drum even when the course is not easy.

Society’s notion of “race” is being confronted. I once heard someone say Rachel is living before her time and I agree. Some may diagnose her as transracial  or the idea of a person crossing racial boundaries, but I think it is something deeper.

You can find The Rachel Divide on Netflix. And if you want to read her book In Full Color, you can find it here on Amazon.