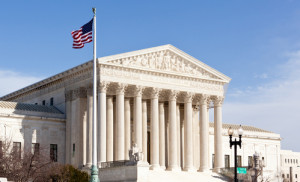 On Wednesday, March 16th, 2016, President Obama nominated Merrick Garland to fill the vacancy on the United States Supreme Court left open by the sudden passing of Associate Justice Antonin Scalia. The nomination left many people wondering, “Who is Merrick Garland?”

Garland is a 63 year-old man who was raised in suburban Chicago by middle-class parents. He attended Harvard University on scholarship and graduated valedictorian in 1974. He then attended Harvard Law while working to support himself until he graduated magna cum laude in 1977. Upon graduation he served a clerkship under a U.S. Court of Appeals judge from 1977 to 1978 and then a U.S. Supreme Court judge until 1979. He then worked as a special assistant to the Attorney General until 1981 when he joined Arnold & Porter as a corporate litigator. He was a partner at the firm from 1985 to 1989 at which point he entered the public sector as an Assistant U.S. Attorney. While there he worked on a myriad selection of criminal cases but rejoined Arnold & Porter in 1992.

In 1993, Garland became deputy assistant attorney general for the criminal division of the U.S. Department of Justice under the Clinton administration. It was during his time here that he had a defining moment in his career, overseeing the prosecution of the Oklahoma City bombers. He visited the site of the bombing and represented the government at the defendant’s preliminary hearings. He reportedly would have liked to lead the prosecution but was needed in D.C. so he closely supervised the prosecution remotely.

In September 1995, then President Bill Clinton nominated him to the U.S. Court of Appeals for the D.C. circuit but he was not confirmed as chief judge until March of 1997 by a 76-23 vote. Garland is generally thought of as a centrist and has been described as a “thoughtful, fair-minded judge who follows the law”.

While the road to confirmation may be a long and difficult one for Mr. Garland, he is no stranger to the frustration. Twice previously he has been on the short-list of potential Supreme Court nominees, although ultimately he was not nominated until now.