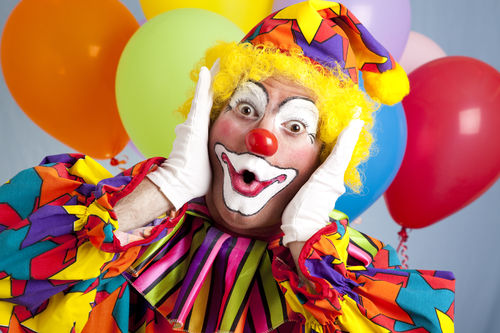 Coulrophobia. The Webster dictionary defines it as an extreme fear of clowns. Which means that living in America right now has to seem like a waking nightmare for some people with all the recent clown sightings being reported.

It all started August 29th, 2016 when residents of the Fleetwood Manor Apartments in Greenville County, South Carolina, reported seeing a person wearing a clown costume lurking around the apartment trying to convince children to come into the woods. A few days later on September 4th police in Winston-Salem, North Carolina, received a call about another incident of a clown trying to lure children into the woods. That seemed to spark a trend that infected the nation.

Throughout September there were a slew of incidents. Children reported being chased while walking to their bus stop by men in clown costumes. A middle school girl in Georgia was placed under arrest for bringing a knife to school for protection against clowns. A threatening Facebook post from the account “Ain’t Clownin Around” threatening to “kidnap students or kill teachers going to their cars.” And that’s just 3 of the 13 reported incidents in September.

Is it all a hoax?

The New York Times reports that false reports of “creepy clown” sightings have led to 12 arrests in 10 states. So yes, some of these sightings are a hoax but many aren’t, and there’s proof.

A menacing looking clown, who was later dubbed as “gags” was photographed while terrifying people in Wisconsin. A Kentucky man was arrested and charged with disorderly conduct for wearing a clown costume in a public place. And two women in Michigan were arrested and charged with disorderly conduct for chasing two 14 year olds while dressed as scary clowns. So yes, many of these sightings are definitely real and it’s becoming mainstream.

In early October Stephen King, the man that popularized the image of the scary clown with his movie “It” took to social media to ask people to “cool the clown hysteria”.

Hey, guys, time to cool the clown hysteria–most of em are good, cheer up the kiddies, make people laugh.

So why are the clown sightings frightening people?

Most experts believe that most creepy clown incidents are copycats conducted by pranksters that enjoy scaring people. However, whether it’s a prank or not doesn’t mean that it isn’t still creepy.

With Halloween quickly approaching, and creepy clown sightings being reported all the way in the United Kingdom and Australia now, the trend shows no signs of slowing down. I think at this point we’re all starting to realize that we are all a little bit coulrophobic.

County has imposed a curfew, and officials are working to find a motive and suspect into the shootings that have left 40,000 customers without power

With no suspects or motive announced, the FBI is joining the investigation into power outages in a North Carolina county believed to have been caused by "intentional" and "targeted" attacks on substations that left around 40,000 customers in the dark Saturday night, prompting a curfew and emergency declaration. [...]

FedEx driver is arrested in the kidnapping and killing of a 7-year-old girl who went missing outside her home this week, police say

The investigation into the murders of four University of Idaho students is entering a critical stage in its third week, as police are starting to receive forensic testing results from the crime scene, law enforcement experts tell CNN. [...]

• Opinion: The most underestimated president in recent history [...]

These are the world's most expensive cities to live in 2022

• The surprising group that flooded stores over the holiday shopping weekend • To make money, avoid these common mistakes • Analysis: More head-scratching, contradictory news about the economy [...]

George Clooney has a surefire way for staying out of trouble as a public figure in the age of social media: stay off of it. [...]

• Opinion: I'm a volcanologist. Here's what this Mauna Loa eruption will teach us [...]

A 2-year-old girl is recovering after being attacked by a coyote Friday afternoon in front of her house in a Los Angeles neighborhood, her father told CNN. [...]

Watch the video of the moment of the attack

A Ring security camera captured the moment 2-year-old Ariya was attacked by a coyote outside her home in Los Angeles, her father told CNN. Ariel Eliyahuo said his daughter had to have multiple rabies shots after the attack. [...]

This country's relationship with Russia is causing concern in Ukraine

Retired Air Force Col. Cedric Leighton breaks down the potential Russian strategy in regards to the city of Bakhmut, Ukraine. [...]

The Democratic National Committee's overhaul of the presidential nominating calendar will create many challenges for Iowa Democrats, who are already at a low point following another disappointing election cycle. [...]

How Roosevelt offers an 'ominous' lesson for Trump and the GOP

• Trump calls for the termination of the Constitution in Truth Social post • Analysis: How Donald Trump is helping Raphael Warnock in Georgia • MAGA-world keeps losing in its efforts to tie up Trump criminal probes in court [...]

Analysis: Trump's call to terminate the Constitution is a fantasy, but it's still dangerous

Donald Trump's call for the termination of the Constitution is his most extreme anti-democratic statement yet and seems oblivious to the sentiments of voters who rejected election deniers in the midterm elections. [...]