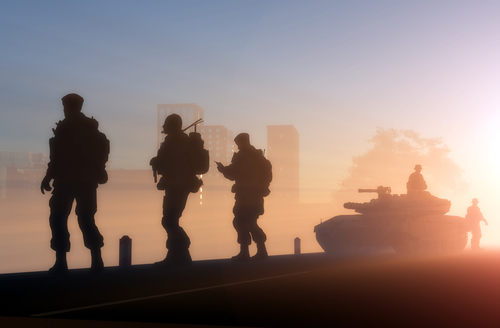 UPDATE:  The government is now in control of Turkey. The coup is over.

These figures are likely to change, but we are currently seeing reports of the death toll being at 161 people.  Roughly, 1400 people are injured. About 1500 military personnel have been captured in the attempted coup. Five generals and 29 colonels have been relieved of duty.

The Parliament building has been defaced due to the attacks.

Young soldiers are being shown as the main participants in the coup, but it is unclear who was leading the military coup. The Turkish government blames an exiled cleric living in the United States named Fethullah Gulen for the coup. However, he and his followers staunchly denies those allegations.

UPDATE:  President Obama and the White House is monitoring the ongoing situation. The President supports the Turkish elected government.

There is fighting between the military coup and the government forces. There isn’t a figure on casualties yet.

Reports are flooding in about an attempted military coup happening in Turkey right now.

The military or apart of the military is trying to overthrow the government. The whereabout of President Recep Tayyip Erdoğan is unclear. Citizens are reporting troops on the ground, tanks, gunfire, explosions, low flying jets, police helicopters, among other things. The airport and bridges has been closed. Social media has reportedly  been blocked. Martial law and a curfew is in effect.

The United States State Department urges Americans to contact their family and let them know they are safe. Their twitter status is advising citizens to shelter in place. At this time, it is not recommended to go to the American Embassy or Consulates. Do not go onto the streets.

This instability is causing great concern around the world. Turkey is critical to NATO and the West. In addition, the safety to all civilians is worrisome.

The exact details of what is taking place are unclear at this point. Both the military and President Recep Tayyip Erdoğan are claiming control.

If you are in Turkey, please be safe. Stay inside and monitor the local news. We will report more news as it comes in.

Arizona Sen. Kyrsten Sinema tells CNN's Jake Tapper she is leaving the Democratic Party and registering as a political independent

Views of the state of the country are slightly improved, but Americans' economic concerns remain

Americans' views of the state of the nation have bounced back slightly since earlier this year, a new CNN poll conducted by SSRS finds, but public perception of the economy remains grim. Nearly half of Americans say they're financially worse off than they were a year ago, the survey finds, with more than 90% expressing concerns about the cost of living and the majority cutting… [...]

As a right-wing faction threatens to tank his speakership ambitions, House GOP leader Kevin McCarthy delivered a promise: "I'll never leave," making clear he has no plans to drop out of the race even if the fight goes to many ballots on the floor. [...]

Congress is debating new retirement rules. These 7 changes are on the table

New retirement rules could make it easier for Americans to accumulate retirement savings — and less costly to withdraw them — if lawmakers pass a retirement reform package before the end of the month. [...]

The House voted to pass legislation on Thursday to protect same-sex and interracial marriage, the last step before the measure goes to President Joe Biden for his signature and becomes law. [...]

This year's most expensive US Senate race in the country -- over $380 million spent through the end of November -- is finally over. Georgia's incumbent Democratic Sen. Raphael Warnock, pastor at Atlanta's historic Ebenezer Baptist Church, won the December 6 runoff against his Republican challenger, former University of Georgia football star Herschel Walker. [...]

Brittney Griner lands in US after Russian prisoner swap

• Griner arrives in US after being released from Russian custody in prisoner exchange • Video: See the moment Griner lands on US soil • 4 major questions about the swap, explained [...]

Jan. 6 committee considers criminal referrals for at least 4 others besides Trump

• Justice Department seeking to hold Trump in contempt over classified documents • Trump does not plan to appeal dismissal of Mar-a-Lago special master to Supreme Court • Opinion: Why this week of Trump was different [...]

South Koreans are about to get a year or two younger, thanks to a new law

South Koreans are about to get a year or two younger, thanks to a new law passed on Thursday that aims to standardize how age is calculated in the country. [...]

The exoplanet 55 Cancri e goes by several names, but the rocky world located 40 light-years from Earth is most known for its reputation as a "hell planet." [...]

Look of the Week: Michelle Obama has outdone herself

Former First Lady Michelle Obama is in the middle of a month-long book tour and, as always, her style choices are making headlines. But there's been a noticeable shift in her clothes, from the classic silhouettes she's known for to more playful, cool-girl styles. [...]

Toni Collette and husband Dave Galafassi are divorcing after 20 years of marriage. [...]

'It's been a wild ride': Trevor Noah bids farewell to 'The Daily Show'

The South African comedian ended his seven-year tenure as the host of Comedy Central's satirical news report "The Daily Show." [...]

Japanese fashion mogul Yusaku Maezawa has picked eight passengers that he said will join him on a trip around the moon, powered by SpaceX's yet-to-be-flown Starship spacecraft. The group includes American DJ Steve Aoki and popular space YouTuber Tim Dodd, better known as the Everyday Astronaut. [...]

The pioneering editor widely credited with growing the iconic — and often infamous — Sports Illustrated Swimsuit Issue into a cultural institution has died at 96. [...]

Chris Wallace asks Fauci what he thinks about Donald Trump

As he prepares to leave the National Institutes of Health after 54 years of public service as the nation's top doctor of infectious disease, Dr. Fauci reflected on the ups and downs throughout his career. [...]

The United Kingdom, Japan and Italy announced Friday they are teaming up to build a sixth-generation fighter jet, designed to rival or eclipse the best warplanes now employed by the likes of China and Russia -- and possibly even the United States, the main ally of the trio. [...]

'Who started it?': Putin makes rare public comment about who's to blame for attacks

CNN's Will Ripley reports from Kyiv, Ukraine, on Russian President Vladimir Putin's comments at a reception after an awards ceremony for 'Heroes of Russia,' in the Kremlin. [...]

A former officer with the New York Police Department was sentenced to 25 years to life in prison Thursday after he was found guilty last month of murder in the second degree related to the death of his 8-year-old son, Thomas. [...]

LeAnn Rimes 'devastated' over having to postpone tour due to illness

LeAnn Rimes is postponing some of her tour dates due to a bleed on her vocal cord. [...]

Kylah Spring, and her mother Betsy, spoke with "CBS Mornings" about the racial attack on the University of Kentucky's campus that went viral. [...]

Attorneys for Dr. Caitlin Bernard, the Indiana doctor who provided abortion services to a 10-year-old rape victim from Ohio, and her medical partner dropped their lawsuit against the state attorney general Thursday. [...]

Iran has executed a man for injuring a paramilitary officer in the first known execution linked to protests that have swept the country since September, state media reported Thursday. [...]

When Joshua Pettit posted a video of his 85-year-old mother with Alzheimer's on social media, he had no idea how the internet was going to react. It turns out, they couldn't get enough. [...]

More than 90% of hospital beds are full in one state, with more than 80% full in eight others

Hospitals are more full than they've been throughout the Covid-19 pandemic, according to a CNN analysis of data from the US Department of Health and Human Services. But as respiratory virus season surges across the US, it's much more than Covid that's filling beds this year. [...]

Period underwear is better for the environment, but does it work? Experts weigh in

A period product that's eco-friendly, stylish and easy to use might sound impossible. But period underwear might be just that. [...]