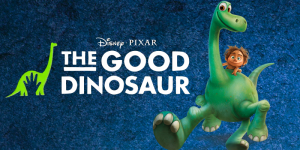 Disney-Pixar released their latest movie: The Good Dinosaur. It looks like a feel-good movie you can see and enjoy with your children around the holiday season. The movie has already been released in Paris (November 10, 2015) and will premier in the United States on November 25, 2015, just in time for Thanksgiving.

The premise of The Good Dinosaur seems to center around an alternate history. It has been theorized by experts that an asteroid caused the mass extinction of the dinosaurs. In The Good Dinosaur,  the asteroid does not strike Earth. Now humans and dinosaurs live side-by-side. Based on the trailer, it looks like a friendship develops between two unlikely friends from two vastly different worlds: Arlo, the dinosaur, and Spot, the little boy. The friendship in the movie is a  positive message for today’s world.

What do you think of the movie trailer? Is this a movie you would want to see? Let us know in the comments.